“Make no mistake, as leaders of the world’s cities, states and regions, we are on the front lines in the battle to combat climate change,” said Governor Brown.

Since California first began seeking signatories in May, a total of 80 jurisdictions representing 22 countries and six continents have signed or endorsed the Under 2 MOU. Together, the signatories now represent more than 614 million people and $18.6 trillion in GDP, equivalent to nearly a quarter of the global economy.

"We are waging a fight to save our planet, and we have recognized that we must take action at all levels – as individuals, cities, states, and regions – to combat the very real threat of climate change,” said Ambassador Hartley.

Later, Governor Brown delivered keynote remarks at the "2015 Global Landscapes Forum" following a plenary session featuring international scientists and government leaders seeking to bridge the divide between climate research and policy making--a longstanding priority in California. This event, one of the COP21's largest "side events," was organized by the French government, Center for International Forestry Research, UNEP, the World Bank and others. 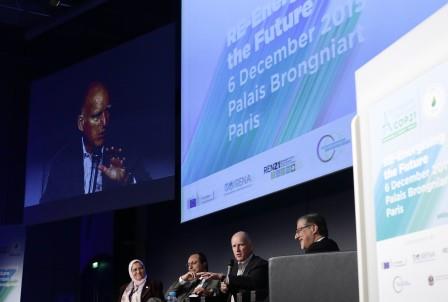 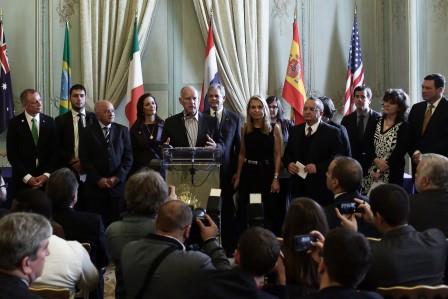 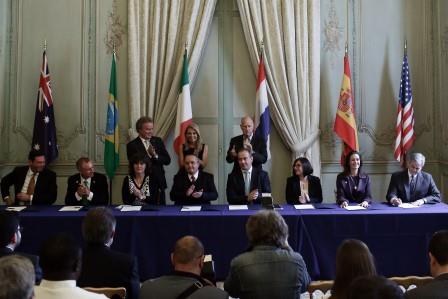 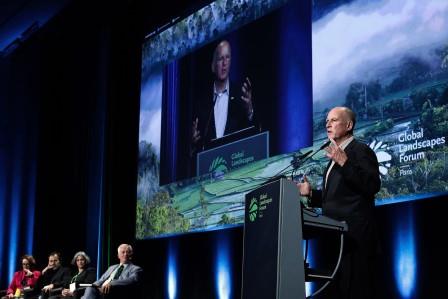 The Under 2 MOU is an agreement to limit the increase in global average temperature to below 2 degrees Celsius, the warming threshold at which scientists say there will likely be catastrophic climate disruptions.

“Like California, South Australia is leading the transition to a low carbon economy,” said South Australia Premier Jay Weatherill. “We are powered by more than 40 percent renewables and we aim to make our capital, Adelaide, the world’s first carbon neutral city. We are proud to join with other sub-national governments taking decisive action on global warming through the signing of the Under 2 MOU.”

While South Australia is the first Australian state to sign the agreement, Rhode Island became the ninth American state to join the Under 2 MOU.

“Rhode Island is making every effort to address climate change and mitigate its impacts on the environment, public health, and the economic strength of our communities,” said Rhode Island Governor Gina Raimondo. “Our recently adopted State Energy Plan identifies a group of policies which will allow us to reduce greenhouse gas emissions by about 45 percent by 2035, and aims for approximately 80 percent in reductions by 2050. We look forward to working within our borders and with our partners nationally and around the world to achieve a strong, sustainable, clean energy future.”

Under the agreement, signatories commit to either reducing greenhouse gas emissions 80 to 95 percent below 1990 levels by 2050 or achieving a per capita annual emission target of less than 2 metric tons by 2050. These targets allow each individual government to tailor emission reduction plans to fit regional needs.

The pact seeks to enhance cooperation to achieve these goals through a range of activities, including:

For more information on the agreement, please visit www.under2mou.org.

Statements from Under 2 MOU Signatories

Mato Grosso, Brazil Governor Pedro Taques: “We will propose during the U.N. Climate Conference, a strategy aimed at reducing CO2 emissions six gigatons by 2030, with a zero deforestation goal already in 2020. We have bold goals for sustainable development that seek to combine increased production, forest conservation and socio-economic inclusion. But that will only be possible through the joining of forces between the state government, federal government, foreign investment funds and private sectors.”

Jämtland Härjedalen, Sweden Regional Commissioner Robert Uitto: “The Jämtland Härjedalen region is committed to ambitious climate goals and it is very important for us to engage in international collaborations to battle climate change. Tourism is one of our most important sources of income, and the tourism industry in our region is dedicated to driving sustainable development. Other initiatives include for instance renewable energy production. Now it is time to escalate all these efforts, in order to secure a sustainable future.”

Midi-Pyrénées Region, France President Martin Malvy: “The Region Midi-Pyrenees is pleased to join initiatives involving local authorities that are on the frontline in the fight against climate change or to manage the consequences. The Under 2 MOU orientations for 2050 are similar to the momentum generated by the Region Midi-Pyrénées through its plan ‘Midi-Pyrénées Energies,’ in partnership with many other public and private stakeholders.”

Navarra, Spain Director General of Environment Eva García Balaguer: “Promotion of renewable energy, improvements in energy efficiency, sustainable mobility plans in urban centers, and applied research carried out in the private sector – these are just some examples of the progress made in Navarre to date. There is no denying that the progress made thus far is a good starting point, but in the current context, with the commitments made both in Europe and internationally, this is not enough. Navarre wants to take a firm stance in the fight against climate change. We are a small region, but it does not exempt us from international liability regarding the reduction of emission and doing our contribution to stop climate change. Therefore, we are grateful to California and leading and signatories regions and local powers of Under 2 MOU initiative.”

City of Bristol, U.K. Mayor George Ferguson: “Cities and regions must work together to create a low carbon, sustainable future. We have no choice but to act if our cities – of all sizes – are to become great places to raise families, to become child-friendly, safe and healthy. We hope that some of the transformational action Bristol is taking, such as reducing energy demand for over 30,000 homes since 2005 in order to tackle fuel poverty, will inspire others to join us. We’re showing the way by reducing emissions, improving lives and creating jobs through our investment in simple low carbon actions.”

City of Seattle, Washington Mayor Ed Murray: “Local commitments to climate action have helped propel worldwide attention and action leading up to the Paris conference. Seattle has long been at the forefront of this movement, and I am excited to see this level of engagement from other cities as exhibited in this agreement. We will continue to respond to climate change locally even as we push the federal government to step up its commitment.”

City of Austin, Texas Mayor Steve Adler: “Austin has set a target of net-zero community-wide greenhouse gas emissions by 2050. We are pleased to join a growing number of cities making bold commitments to reducing our carbon footprint and take action to mitigate the severity of climate change. This is unchartered territory in which we are working and there are advantages to broadening the collective brain power and testing capacity and sharing of best practices offered by coalitions such as Under 2.”

City of Oakland, California Mayor Libby Schaaf: “We are excited to pursue our ambitious climate action goals, and support the Under 2 MOU in aligning subnational governments around these commitments. Oakland proudly supports fellow governments in making and achieving tangible commitments, and to prove that success in meeting these goals is possible.”