El Centro, California - The Imperial County Sheriff’s Office- Jail Division welcomes its newest member to the division, Correctional Canine Gauge. The Imperial County Sheriff’s Office takes great pride in its K-9 Unit because of the proficiency, ability and utility of the canines working in partnership with its handlers and the community. The canine program was established to augment searches of the facilities and decrease the amount of contraband. 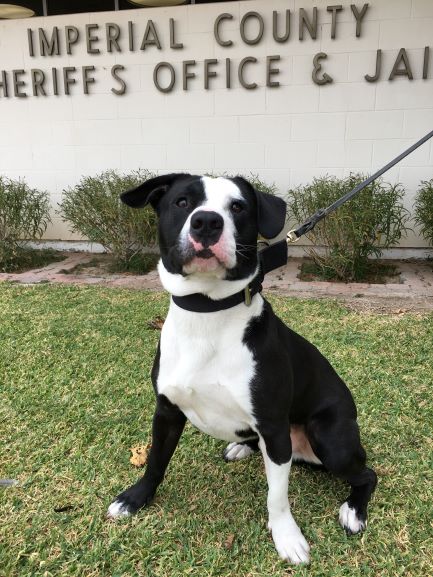 Correctional K-9 Gauge and the Handler, Correctional Officer S. Lopez, will be partnering up in order to eradicate contraband entering the Imperial County Jail. Gauge and Officer Lopez recently completed the K-9 academy together, where K-9 Gauge became a certified Narcotic Detection Dog (NDD), trained to find Cocaine, Heroin, THC, Methamphetamines and their derivatives.
Gauge, Pit-bull mix, was found in Northern California’s Antioch Animal Services – Shelter and given the opportunity by Dave Dorn and his team at K-9 Specialized Training & Consulting (K9stac), who recognized Gauge had a drive best suitable in becoming a NDD. The Correctional Canine Unit at the Imperial County Jail has been successful throughout its entirety and Officer Lopez and his four legged partner are looking forward to further its success.