“California has taken groundbreaking steps to increase the efficiency of our cars, buildings and appliances and provide ever more renewable energy,” said Governor Brown. “With SB 350, we deepen our commitment.”

Governor Brown signed the legislation from the East Terrace of the Griffith Observatory overlooking the City of Los Angeles and was joined by dozens of government, climate, business, environmental justice and community leaders.

SB 350 codifies goals Governor Brown laid out in his January 2015 inaugural address to double the rate of energy efficiency savings in California buildings and generate half of the state’s electricity from renewable sources by 2030.

“Today, California is laying the groundwork for a healthier and sustainable future for all of our families,” said Senate President pro Tempore De León. “We are showing the world through innovation how we can transition and increase access to renewable energy while cleaning up the air we breathe, especially in our most polluted communities.” 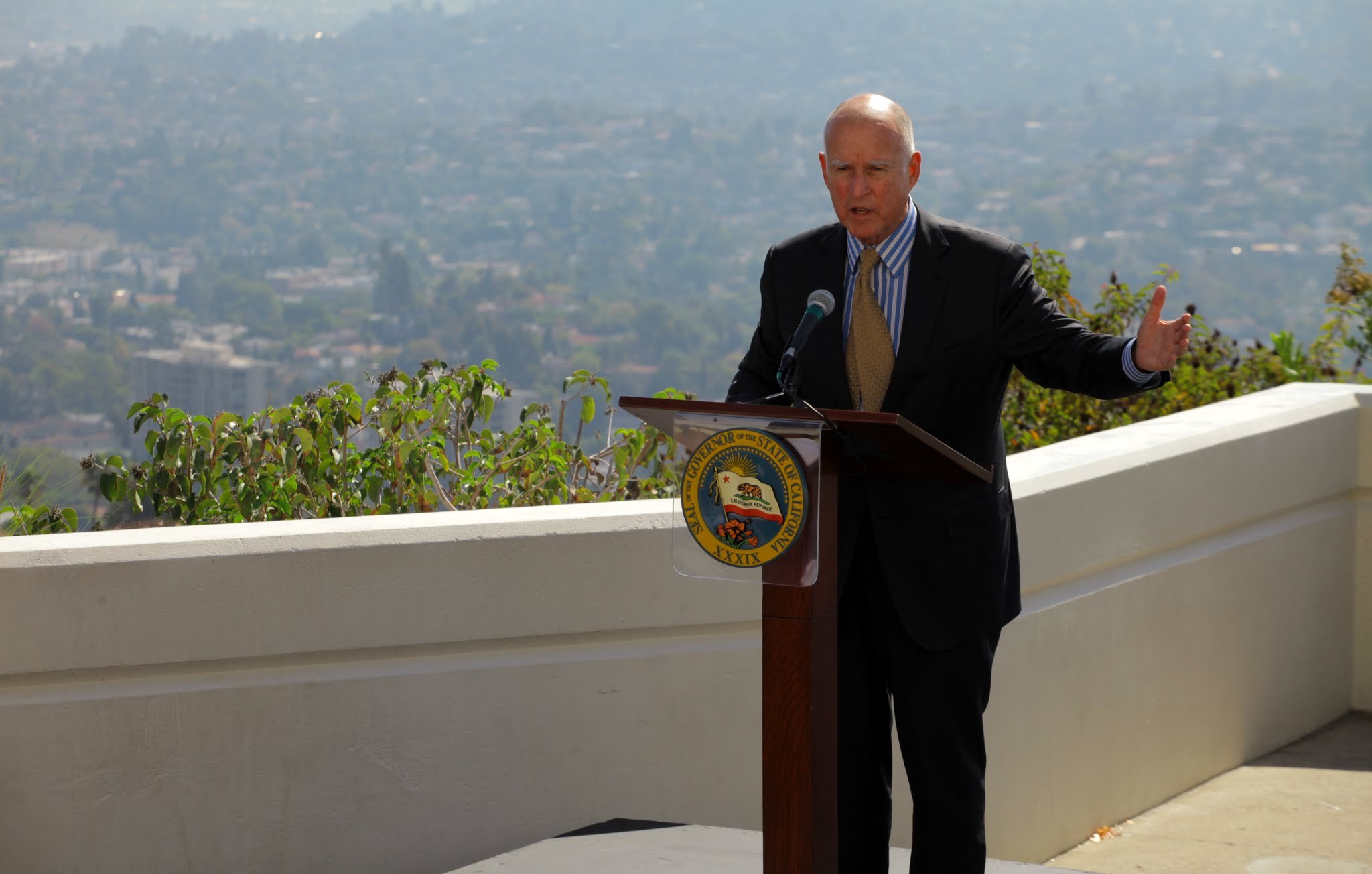 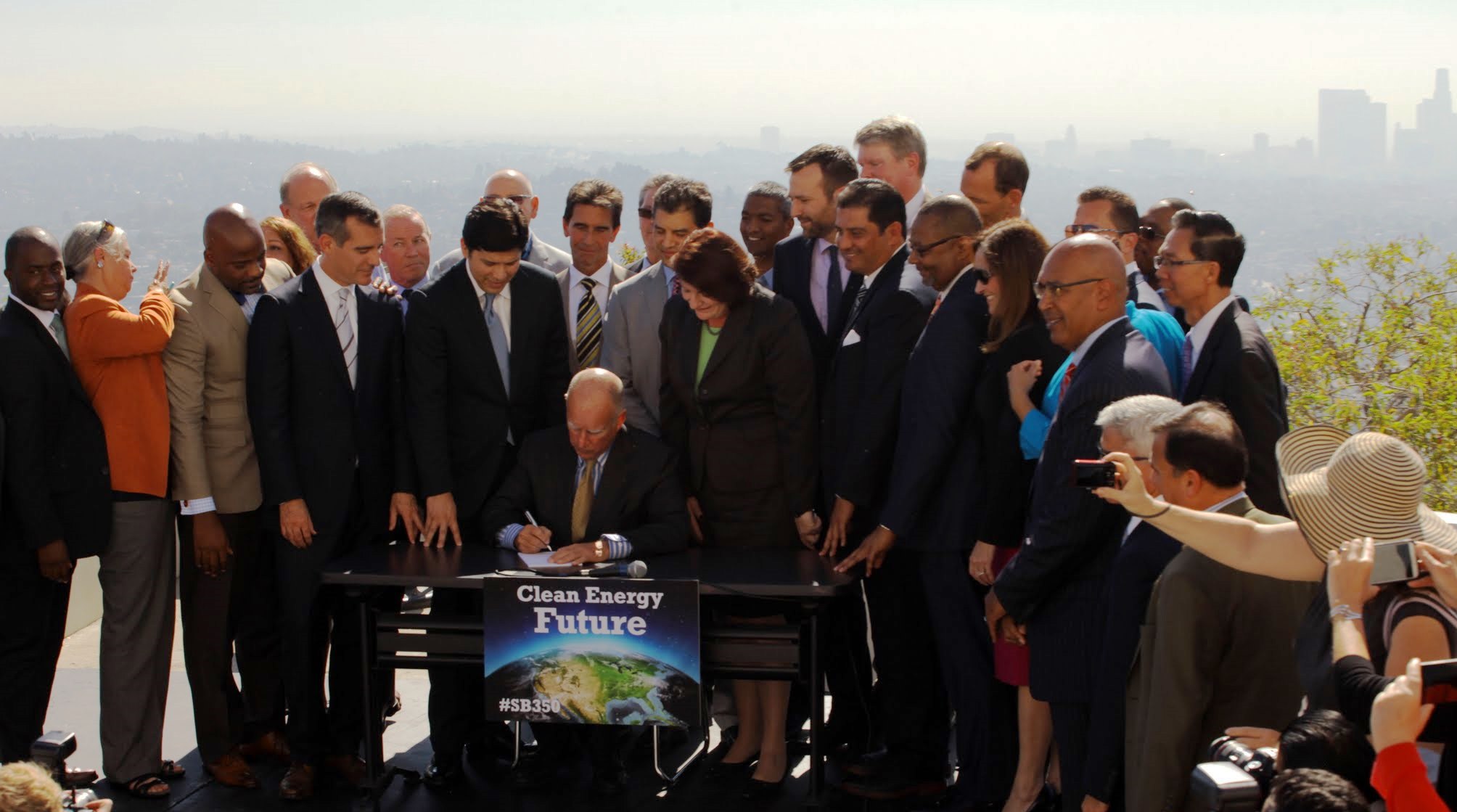 The legislation is an important step in the state's landmark plan to cut climate-warming pollution. It also establishes state policy to promote transportation electrification to meet the state's climate and clean air goals.

“Rising sea levels will impact homes, businesses, infrastructure, our national security, and our economy,” said Assembly Speaker Toni Atkins. “That's why SB 350 is so important to our future. With SB 350 California is leading by example. It sets the course for our state, for the nation and for the world. There will come a time when climate change deniers finally pull their heads out of the sand. When that day comes, they can look around and see that California will be in better shape because we put SB 350 in place today.”

“We are extremely happy that Governor Brown is signing SB 350, and grateful for Senator Kevin De Leon’s leadership,” said Physicians for Social Responsibility-Los Angeles (PSR-LA) Executive Director Martha Dina Argüello. “PSR-LA is committed to continuing to work with the Governor, the Legislature, and the California Air Resources Board to make sure SB 350 is fully implemented. By increasing renewable energy production and energy efficiency in buildings we can reduce the terrible health burdens caused by our use of dirty energy and fuels.”

Governor Brown first announced the goals codified in SB 350 in his inaugural address this year, in which he also committed to reduce today's petroleum use in cars and trucks by up to 50 percent within the next 15 years; make heating fuels cleaner; reduce the release of methane, black carbon and other potent pollutants across industries; and manage farm and rangelands, forests and wetlands so they can store carbon.

Additionally, as the clock ticks for national governments to reach a deal to reduce harmful emissions ahead of the United Nations Climate Change Conference in Paris, Governor Brown continues to focus on building and broadening collaboration amongst cities, states and provinces, at the "subnational level."

To that end, the Governor has spearheaded a global pact amongst cities, states and countries – called the Under 2 MOU – to limit the increase in global average temperature to below 2 degrees Celsius – the warming threshold at which scientists say there will likely be catastrophic climate disruptions. To date, a total of 42 jurisdictions representing 19 countries and five continents have signed or endorsed the Under 2 MOU, collectively representing more than $13.1 trillion in GDP and 463 million people. If the signatories represented a single country, it would be the second largest economy in the world behind only the United States.

In addition to action on the Under 2 MOU, in recent months the Governor has traveled to the United Nations in New York, the Vatican in Italy and the Climate Summit of the Americas in Toronto, Canada to call on others leaders to join California in the fight against climate change.

These efforts build on a number of other international climate change agreements with leaders from Mexico, China, North America, Japan, Israel,  Peru and Chile. Governor Brown also helped convene hundreds of world-renowned researchers and scientists to issue a groundbreaking call to action – called the consensus statement – which translates key scientific climate findings from disparate fields into one unified document.