Lamborghini at the 12 Hours of Sebring

Sebring, Florida - The 64th edition of the 12 Hours of Sebring, second round of the IMSA WeatherTech Sports Car Championship, will be remembered for the difficult weather conditions - 2 hours and 15 minutes of race neutralization for heavy rain - and for very small leads in all four categories on track. 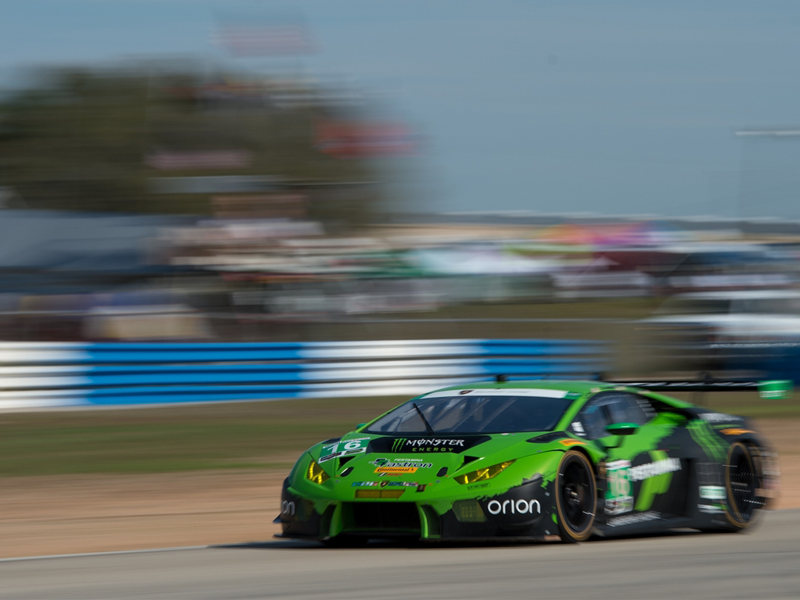 Lamborghini Squadra Corse took the best result in GTD class with Paul Miller Racing's Huracán # 48, which after 229 laps, equivalent to 850 miles, finished in sixth place just eight seconds from the winner. The car driven by Bryce Miller, Bryan Sellers and Madison Snow led the first part of the race, occupying the first position for a few hours and clocking lap times among the best of its category, just when track conditions were compromised by severe weather conditions.

Winning ambitions have faded away for Change Racing, which is always fighting for top positions with the Huracán GTD #16 driven by the Lamborghini GT3 Junior Driver Corey Lewis, Spencer Pumpelly and Al Carter. Always in top positions during practice sessions in GTD class, the Huracán supported by Lamborghini Carolinas fought for the first place until it lost positions, due to a stop and go and a 4-minute penalty and ended up 11th.
The second car fielded by Change Racing, # 11 of Townsend Bell, Bill Sweedler and the Lamborghini Blancpain Super Trofeo North American champion Richard Antinucci, was stopped in the early steps of the race for an off-track, due to difficult asphalt conditions of the track, which was then plagued by thunderstorms.

Konrad Motorsport finished the 12 Hours of Sebring in 14th place with car # 28 of Konrad-Borcheller-Bruck-Webster, while Dream Racing's Huracán # 27 (Babini-Sbirrazzuoli-Ruberti-Persians) suffered a technical problem.

This is the quote of Giorgio Sanna, Head of Lamborghini Motorsport: "This twelve hours endurance race was particularly hard due to the severe weather conditions, but the Huracán GT3 has demonstrated reliability, high performance and drivability in every track conditions. It's a pity to have lost the podium despite being competitive, this was another experience for our customer team".