“This is important that you’re here – that’s big – but the threat and the task, the complexity, the cost and the political resistance is formidable. So this is not for the faint of heart, this business of climate change is not for wimps,” said Governor Brown. “We have to renew our commitment, we have to deepen our understanding, we have to intensify our effort.” 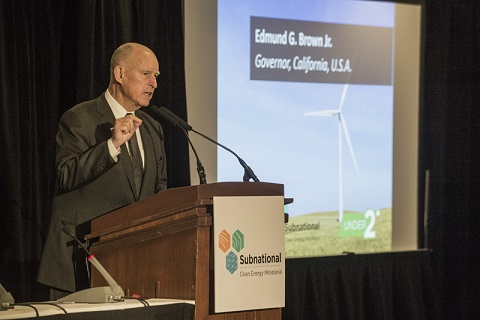 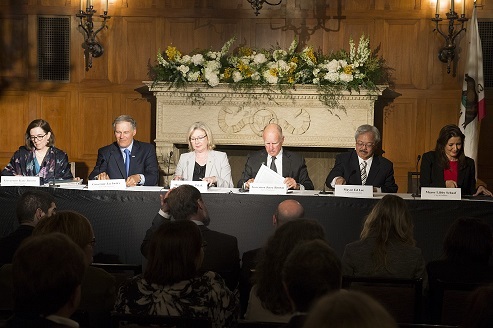 The Pacific Coast Climate Leadership Action Plan: An agreement between Pacific Coast Collaborative members California, Oregon, Washington and British Columbia, which reaffirms the key climate and clean energy commitments made in 2013 and extends regional collaboration in new ways, including: establishing a consistent approach for monitoring and reporting on emissions of short-lived climate pollutants such as methane and black carbon, with the aim of establishing reduction targets by 2020; promoting integration of electricity grids in Western states and increasing opportunities for cross-national energy sharing; increasing climate resilience through collaboration on drought preparedness, wildfire risk mitigation and forest restoration; and accelerating the transition to zero-emission vehicles (ZEVs) through support for a comprehensive Pacific Coast charging network and bulk vehicle purchasing programs.

The Pacific North America Climate Leadership Agreement: A pact between Pacific Coast Collaborative members California, Oregon, Washington and British Columbia, as well as the City of Vancouver, British Columbia and U.S. cities Los Angeles, San Francisco, Oakland, Seattle and Portland in which the jurisdictions commit to achieve an 80 percent reduction in greenhouse gases by 2050 through collaboration in several areas. These include strategies to enhance the regional ZEV market; implementation of benchmarking and disclosure programs for energy use by large buildings; aiming for energy data reporting from at least 75 percent of eligible large building square footage; and reducing carbon emissions from food waste through organic waste prevention and recovery initiatives such as composting and food redistribution.

Additionally, as part of the day’s events, Governor Brown welcomed seven jurisdictions – Telangana, India; Veneto, Italy; Laikipia County, Kenya; City of Budapest, Hungary; City of Santiago, Chile; City of Sacramento, USA; and the City of Portland, USA – as new signatories to the Under 2 MOU climate agreement, the global pact among cities, states and countries to limit the increase in global average temperature to below 2 degrees Celsius. A total of 135 jurisdictions representing 32 countries and six continents have now signed or endorsed the Under 2 MOU. Together, they represent more than 783 million people and $21 trillion in GDP, equivalent to more than a quarter of the global economy. Signatories commit to either reducing greenhouse gas emissions 80 to 95 percent below 1990 levels by 2050 or achieving a per capita annual emission target of less than 2 metric tons by 2050.

Earlier in the day, Governor Brown gave keynote remarks and participated in a panel on subnational leadership in renewable energy with Governors Inslee and Brown and Environment Minister Polak to discuss the rapid scaling and expansion of renewable energy worldwide.

Tomorrow, Governor Brown will give remarks at the seventh Clean Energy Ministerial (CEM7), an annual meeting of national energy ministers and other high-level delegates from 23 member countries and the European Commission. The SubCEM and CEM7 events represent an opportunity to discuss how states, provinces, cities and countries will follow through on the commitments made at the UN Climate Change Conference in Paris, where Governor Brown and U.S. Secretary of Energy Ernest Moniz first announced that California would host the CEM7.

While California emits around 1 percent of the world's greenhouse gases, the state is playing a leading role in broadening collaboration among subnational leaders.

In the past year, the Governor has traveled to the United Nations headquarters in New York, the United Nations Climate Change Conference in Paris, the Vatican in Italy and the Climate Summit of the Americas in Toronto, Canada to call on other leaders to join California in the fight against climate change.

Governor Brown also joined an unprecedented alliance of heads of state, city and state leaders – convened by the World Bank Group and International Monetary Fund – to urge countries and companies around the globe to put a price on carbon.

These efforts build on a number of other international climate change agreements with leaders from the Czech Republic, the Netherlands, Mexico, China, Japan, Israel, Peru and Chile and Governor Brown's efforts to convene hundreds of world-renowned researchers and scientists around a groundbreaking call to action – called the consensus statement – which translates key scientific climate findings from disparate fields into one unified document.

Last October, Governor Brown signed landmark legislation – SB 350 – to double the rate of energy efficiency savings in California buildings and generate half of the state's electricity from renewable sources by 2030. Governor Brown also committed to reduce today's petroleum use in cars and trucks by up to 50 percent within the next 15 years; make heating fuels cleaner; reduce the release of methane, black carbon and other potent pollutants across industries; and manage farm and rangelands, forests and wetlands so they can store carbon.