“Sixty-six years after passage of the California Equal Pay Act, many women still earn less money than men doing the same or similar work,” said Governor Brown. “This bill is another step toward closing the persistent wage gap between men and women.”

The equal pay legislation, among the strongest in the nation, received broad support from both Republicans and Democrats in the Legislature.

“Today is a momentous day for California, and it is long overdue. Equal pay isn’t just the right thing for women, it’s the right thing for our economy and for California,” said Senator Jackson, chair of the California Legislative Women’s Caucus. “Families rely on women’s income more than ever before. Because of the wage gap, our state and families are missing out on $33.6 billion dollars a year. That money could be flowing into families’ pocketbooks, into our businesses and our economy. After years of dealing with a persistent wage gap, and an equal pay law that has been on the books since 1949 but that is not as strong as it should be, the time is now for women’s paychecks to finally reflect their hard work and true value.” 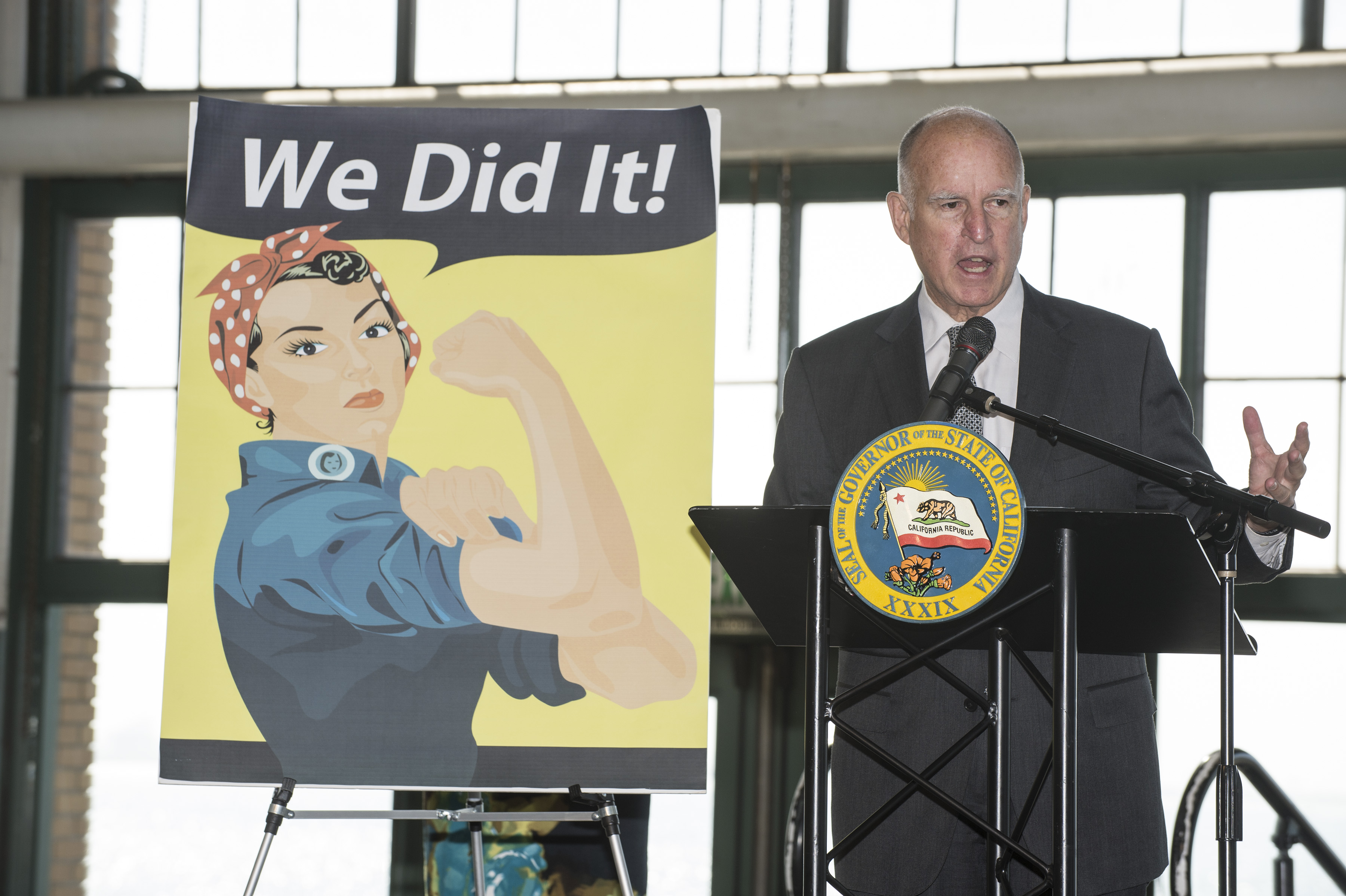 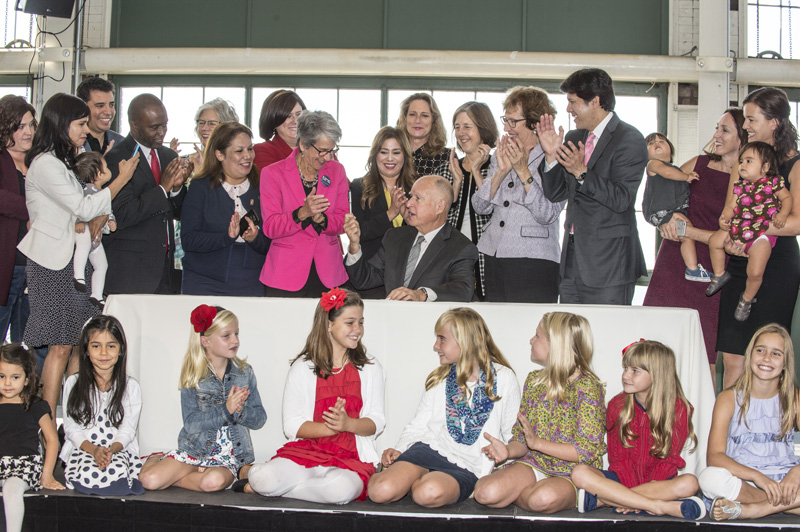 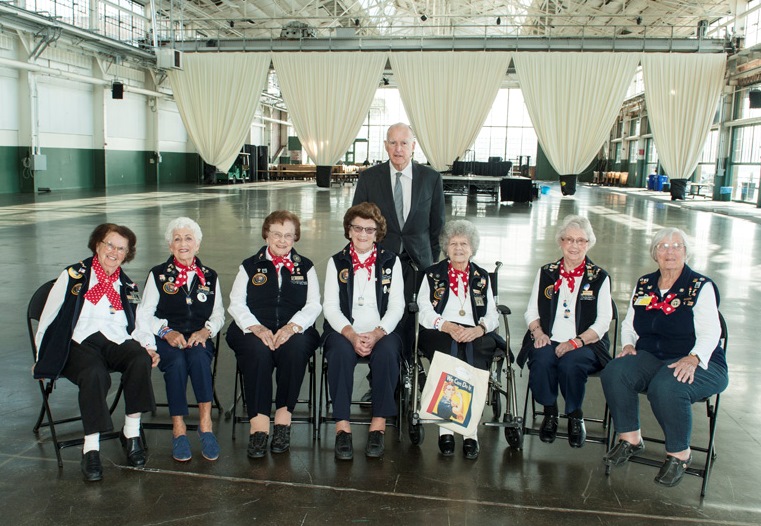 Current law prohibits employers from paying a woman less than a man when they are both doing equal work at the same establishment. With the Governor's signature, California will now require equal pay, regardless of gender, for “substantially similar work.”

The new law also prohibits retaliation against employees who invoke the law, protects those who discuss wages and allows claims based on salaries at different workplaces.

Shriver Report founder, Former California First Lady and award-winning producer of “Paycheck to Paycheck: The Life and Times of Katrina Gilbert” Maria Shriver: “Bravo to California for leading the way on Equal Pay. This bill is a necessary, common-sense policy for millions of working women in California. But it’s not just women who benefit from modernizing our laws and workplaces to require equal pay….men, children, and our families benefit too. As we reported in The Shriver Report, leave out the women, and you don’t have a full and robust economy.  Lead with them, and you do.”

U.S. Senator Dianne Feinstein: “Women in California earn 84 cents for every dollar earned by men. While better than the national average of 79 cents, the California wage gap totals nearly $40 billion each year in lost wages. Even when women perform the same job as men, with the same level of education, the wage gap persists. We can’t allow this discrimination to continue. The bill signed today by Governor Brown will protect women from retaliation if they ask how their pay compares to their counterparts and require employers to justify higher wages for men who perform the same jobs as women. This is a big step to improve the economic security of California families.”

House Democratic Leader Nancy Pelosi: “California continues to lead the way on addressing the challenges facing working women and their families. With the enactment of the landmark California Fair Pay Act, California’s women will have a powerful new tool to secure the equal pay their hard work has earned. We know when women succeed, America succeeds. It’s time for Congress to once again follow California’s lead and ensure all of America’s women enjoy the respect of equal pay for equal work.”

Assembly Speaker Toni Atkins: “Pay disparity is an insidious type of discrimination, one that often occurs behind closed doors. SB 358 will be one of the nation’s strongest laws drafted to ensure women receive equal pay for equal work, and my hope is that other states and our federal government, will follow suit.”

Assembly Republican Leader Kristin Olsen: “If the workload and expertise of male and female employees are the same, there is no reason why pay should not be as well. SB 358 will provide for equal pay for equal work, while ensuring that we avoid a climate of unnecessary litigation, and I am proud to have helped champion this historic legislation.”

Senate Republican Leader Jean Fuller: “I was proud to support the California Fair Pay Act as it made its way through the legislative process and am pleased the governor chose to sign this important piece of legislation that further strengthens California’s law when it comes to equal pay between men and women. This law will help narrow that inequality and make California’s workforce even stronger and more effective.”

Oscar-winning actress and advocate for wage equality Patricia Arquette: “The California Fair Pay Act received bipartisan support because women support families and drive our economy. They also have tremendous political power. I thank Governor Brown, Senator Hannah-Beth Jackson, Equal Rights Advocates, and everyone who ensured the passage of this bill. It is a critical step toward ensuring that women in California are seen and valued as equals.”

Equal Rights Advocates Executive Director Noreen Farrell: “Because the California Fair Pay Act was signed today, more women in this state will be paid what they have earned. It is about fairness for workers; it is about good business; and it is about time. Thank you to Governor Brown and all the hardworking women of California who inspired this bill, which is the strongest equal pay law in the country.”

California Employment Lawyers Association Board Chair Jean Hyams: “For the generations of California women who have entered the workforce in the sixty plus years since the Equal Pay Act was first enacted, today represents a renewed commitment to a promise made long ago. This bill makes clear that employers must take a more active role in correcting the hidden pay disparities that have for too long been plaguing our workplaces.”

California Chamber of Commerce President and CEO Allan Zaremberg: “Equal pay for equal work, regardless of gender, shouldn't be an issue in California. We applaud the Governor and a bipartisan vote in the legislature for establishing this fundamental tenet in statute and providing guidance to employers to determine appropriate wages for non-gender related reasons that allow employers to effectively manage their workforce.”