Washington, DC - If your company has made misleading Made in USA claims and represents that the inaccuracies have been corrected, it’s unwise to put ongoing compliance on the back burner. Conduct like that can move an advertiser out of the frying pan and into the fire. Case in point: the FTC’s proposed complaint alleging that kitchen and home notable Williams-Sonoma falsely represented its signature bakeware line as Made in USA. The FTC action also challenges Made in USA claims for products branded with Williams-Sonoma’s Rejuvenation, Pottery Barn Teen, and Pottery Barn Kids names.

One key provision of the proposed settlement: a $1 million financial judgment. 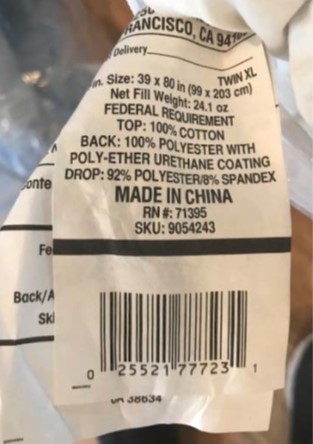 In 2018, the FTC received reports that advertising for Pottery Barn Teen’s organic mattress pads claimed the product was “Crafted in America from local and imported materials.” But when consumers bought the product, they discovered the pads were made in China. After the FTC contacted Williams-Sonoma, the company corrected the false country-of-origin information for the product on its website. FTC staff also directed the company to take a closer look at its country-of-origin verification process.

According to the complaint, Williams-Sonoma explained the misrepresentation as an isolated instance of human error and committed to a multi-step verification process to prevent deceptive country-of-origin claims in the future. Rather than taking law enforcement action, FTC staff responded by closed its investigation with a letter on the public record – a letter that made it clear that the agency “reserves the right to take such further action as the public interest may require.”

Fast forward to May 2019 when the FTC received a report that the company was continuing to disseminate ads and promotional materials, including on its website and in social media, that deceptively claimed certain categories of Williams-Sonoma products were all or virtually all made in the United States.

The FTC says that through those claims and others, Williams-Sonoma represented expressly or by implication that those products (including materials and subcomponents) are all or virtually all made in the United States. But according to the complaint, numerous Goldtouch Bakeware products, Rejuvenation products, and Pottery Barn Teen and Pottery Barn Kids furniture were wholly imported, or contained significant imported materials or components – rendering Williams-Sonoma’s representations false or misleading.

In addition to the $1 million judgment, the proposed order includes court-enforceable provisions consistent with the FTC’s Enforcement Policy Statement on U.S. Origin Claims. The order also prohibits Williams-Sonoma from making any country-of-origin claims unless they’re true, substantiated, and not misleading. Once the proposed settlement appears in the Federal Register, you’ll have 30 days to file a public comment.

“Made in USA” isn’t puffery. It’s an objective representation that many consumers find highly material and it requires solid substantiation. Considering a qualified claim? The Enforcement Policy Statement on U.S. Origin Claims explains that legal standard, too. The other important message of the Williams-Sonoma settlement is this: If you have reason to believe your country-of-origin claims are suspect, act quickly to correct the problem and follow through with vigilance to ensure it doesn’t happen again.

Bake in the basics by visiting the Business Center’s Made in USA page for how-to resources, links to cases, and more than 160 closing letters, many of which include insightful nuggets to streamline your compliance efforts.