The Periodic Table: It's More than Just Chemistry and Physics

Gaithersburg, Maryland - This is the International Year of the Periodic Table, and while I’ve been (accurately) accused of being a physics fanboy, I’m here to tell you that this famous chart isn’t just about physics, chemistry and the other sciences. It’s also about mathematics and engineering and even nonscientific areas of knowledge including history, geography and the origins of words.

First, a quick review of what the periodic table is. It’s a chart of all the chemical building blocks of matter. To date, humans have observed 118, both natural and artificially made. Each of these building blocks, known as atomic elements, contains a positively charged core (known as the nucleus) that is (usually) surrounded by a cloud of negatively charged particles called electrons. Zooming in on the nucleus a little more, we find positively charged particles known as protons and neutral particles known as neutrons. 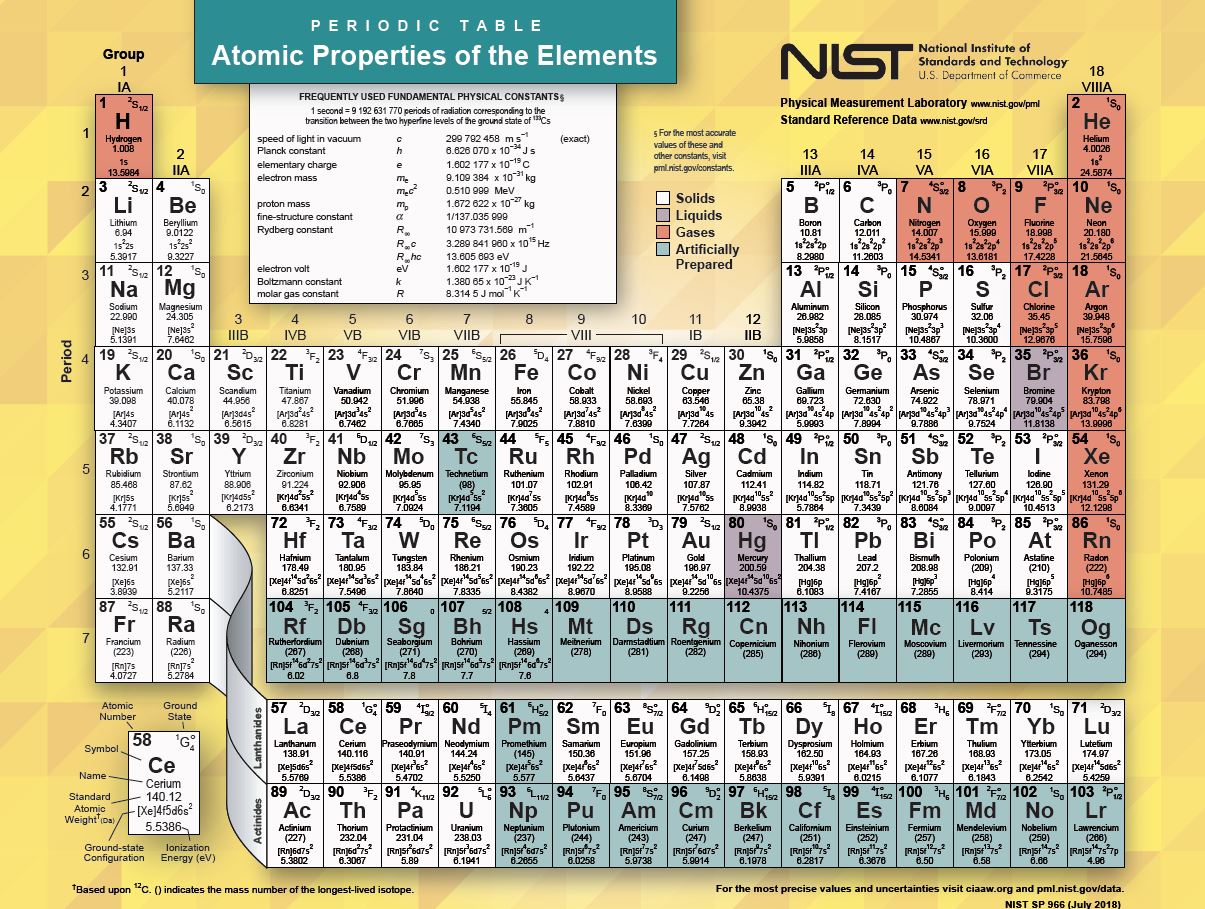 Each atom can have several different versions, known as isotopes, in which there are different numbers of neutrons in the nucleus. For example, hydrogen usually only has one proton and no neutrons, but an isotope known as deuterium or “heavy hydrogen” also contains one neutron.

The deuterium isotope helps create heavier elements inside stars, makes certain drugs more effective, and could be the key ingredient for making clean fusion energy. It was discovered in the 1930s at the National Institute of Standards and Technology (NIST, then known as the National Bureau of Standards), where it was identified by Harold Urey of Columbia University, who won a Nobel Prize for the feat.

So, already you can see this one isotope’s importance in astronomy, pharmaceuticals and energy. And, yet, despite its importance, it’s a rarity compared with ordinary hydrogen, the most abundant ingredient in water, most stars and the universe in general. It’s amazing how one element in the periodic table is found in so many different kinds of stuff in our world.

In 1869, Dmitri Mendeleev, a Russian chemist, created the first periodic table by arranging the atomic elements into columns and rows. Atomic elements in the same columns and rows have certain properties in common. For example, atoms in the rightmost column, known as the noble gases, may differ greatly in mass from light (helium) to heavy (such as radon), but what they have in common is that they don’t ordinarily participate in chemical reactions.

The genius of Mendeleev was that he left spaces for elements yet to be discovered, and in so doing he predicted their existence, such as gallium in 1875 and germanium in 1886. As you may have guessed, the latter was named after Germany (the home country of discoverer Clemens Winkler). As for the former, Paul Emile Lecoq de Boisbaudran named the element “gallia,” after Gaul, the Iron Age region that includes present-day France.

So, if you love history, literature and words, the periodic table is for you. Some elements are named after towns: Strontium comes from the Scottish village of Strontian, where the mineral containing the element was found. Some take their names from mythology. The element vanadium is named after the Norse goddess Vanadis. More recently discovered elements have tended to be named after real people, such as meitnerium (Austrian-Swedish physicist Lise Meitner was a co-discoverer of nuclear fission). Naming elements after places has also been trending. For instance, tennesine comes from the state of Tennessee, the home of Oak Ridge National Laboratory, which performed key work to produce this particular element.

If you like engineering, the periodic table is the ultimate canvas for innovation. The semiconductor industry has used the periodic table to go beyond standard silicon-based devices. Semiconductor engineers have used different combinations of elements from the III and V columns of the periodic table to create new semiconductor alloys, such as gallium nitride (GaN) and indium nitride (InN), each having different advantages. For example, gallium nitride can produce light over a large number of wavelengths, including the blue light used in smartphone screens. Indium nitride can absorb light over a narrower range of wavelengths, making it a great candidate for solar cells, as it absorbs the specific wavelengths of light most common from the sun.

And, of course, there’s materials engineering, too. Engineers like to combine the lightweight metal titanium with other elements such as aluminum to create alloys for aircraft and other vehicles. Alloys of magnesium and other elements such as gold are finding use in medical implants for bone repair. The cool thing about these alloys is that they are biodegradable, so they disappear after serving as scaffolding for new bone growth.

NIST’s Materials Genome Initiative is a modern embodiment of the spirit of the periodic table, using the power of computing, including artificial intelligence, to combine the elements into new materials for desired applications, such as less-expensive-to-make nickel coins and “metallic glasses” for stronger building materials.

Precision timekeeping may not be something you associate with the periodic table, but for NIST researchers who build cutting-edge atomic clocks, it could be the first thing that comes to mind. Since 1967, the second has been defined by atomic clocks using cesium atoms. If cesium atoms are exposed to microwave radiation at a frequency of 9,192,631,770 hertz (cycles per second), they will change quantum energy states. Using an electronic detector to measure if the atoms have changed states, NIST scientists keep the generated frequency locked to the atomic transition, making a very stable frequency output.

Atomic clocks allow us to precisely divide the second into billionths of parts and beyond. Precise time measurements are useful for time stamping financial transactions, synchronizing communications and data, and navigating using the Global Positioning System (GPS). More recently, NIST researchers are making clocks with other atoms such as strontium, ytterbium, mercury and aluminum. The researchers change the quantum states of these atoms using optical radiation, with frequencies of hundreds of trillions of cycles per second (much higher than the microwave radiation used in cesium clocks). These “optical clocks” enable the second to be split into even smaller intervals that could be useful for things such as detecting underground geologic deposits and even dark matter.

If you love numbers, well, of course, the periodic table is filled with them. Each atom on the table has a bevy of quantities. Besides atomic number, there’s atomic weight and ionization energy (the amount of energy it takes to remove an electron from that atom).

How did we get such accurate numbers? As physicists developed quantum theory, they made highly precise (and remarkably correct) calculations for the energy levels of electrons in atoms. Among so many other things, chemists determined how the arrangement of electrons in atoms influences chemical reactions. All this work by the scientists involved state-of-the-art mathematics.

Once scientists developed the fundamentals, however, there was still a lot of work to do in understanding the properties of each of the elements. Who is involved? Measurement scientists, such as the people who work at NIST.

NIST mathematician Jim Sims explained to me: “As the ‘standards’ people, we are the ones who collect the world’s experimental and theoretical data on atomic properties of the elements and critically evaluate it to come up with the best estimate of the numbers in the table at any time. Mathematics certainly goes into that analysis, and more fundamentally any atomic structure calculation relies heavily on both math and computational science.”

I asked Jim what developments in mathematics led to the periodic table that we know today. “Rather than any specific example,” he said, “all I can come up with is the fact that modern physics, chemistry and mathematics are intimately entwined.”

And I’ll take things a step further by saying that so many other fields are intertwined in the periodic table. One small chart is both a source of knowledge and a springboard for creativity, in so many fields. It’s so much more than a poster in your high-school chemistry class; it’s a roadmap for the future.