Washington, DC - In the annals of film, Citizen Kane, The Godfather, and Casablanca are among our top picks. But don’t expect our list to include TBX-FREE, Eupepsia Thin, or Prolongz, dissolving strips of film the FTC says California-based Redwood Scientific deceptively advertised for smoking cessation, weight loss, and male sexual performance. According to the 16-count complaint, the defendants could fill a multiplex with other misleading practices: deceptive endorsements, a bogus “Made in USA” claim, undisclosed negative options, unauthorized credit card charges, false money-back guarantees, and illegal telemarketing.

Oops – we almost forgot the unsupported earning claims for a multi-level-marketing program. 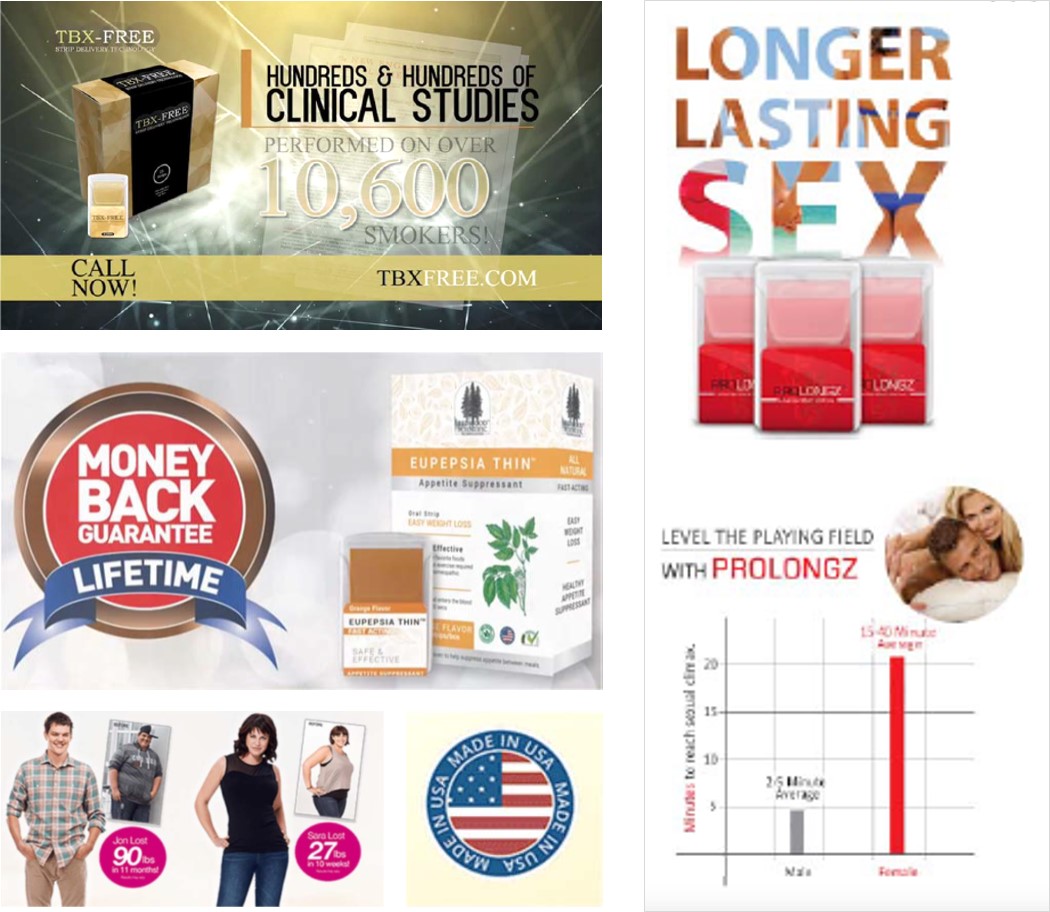 Ads for TBX-FREE claimed the film has an “88% effective rate” for long-term smoking cessation. According to a Facebook Live post, the strip “releases a chemical to the brain, which is naturally found in nature, and it makes you feel like you’ve had a cigarette.” Furthermore, the defendants touted “clinical data” on TBX-FREE “done by some of the greatest medical and scientific institutions anywhere,” including “the New England Journal of Medicine, which ranks our product ten times more effective than nicotine-replacement therapy to stop smoking.”

In addition, the defendants claimed that people who want to lose “10, 20, even 100 pounds” could achieve those results “without giving up your favorite foods or adding any exercise” by using Eupepsia Thin. Featuring dramatic before-and-after photos and consumer testimonials, ads for the product promised “NO DIETS” and “NO GIVING UP FOOD” – representations purported backed by “studies.” In addition, the defendants said the strips were “Made in USA.”

In ads for Prolongz, the defendants promised the film would lead to “longer lasting sex” and prevent premature ejaculation. The company featured eye-catching visuals to claim that the product was “proven to effectively increase the length in Sex for over 97% of Thousands of Men who have tried Prolongz.”

The complaint challenges the defendants’ efficacy and proof claims for all three products as false or deceptive. The FTC also says some of the “consumers” who appeared in ads for Eupepsia Thin were actors, not people who had lost weight by using the product. What’s more, those “Made in USA” strips were actually manufactured in China and India.

But that’s just the start of how the FTC says Redwood Scientific misled consumers. According to the complaint, when people ordered the products, the defendants routinely enrolled them in automatic shipment programs without their consent and without disclosing – or without adequately disclosing – the terms of the transaction. In some cases, the FTC says the defendants signed people up despite express representations from call center staff that consumers wouldn’t be enrolled in autoship programs. According to the lawsuit, the defendants billed consumers’ payment cards without permission and set up obstacles that made it difficult for them to stop recurring shipments, in violation of the FTC Act, the Restore Online Shoppers’ Confidence Act (ROSCA), the Electronic Fund Transfer Act (EFTA), and Regulation E. What about the defendants’ money-back guarantees? In many instances, the FTC says, Redwood Scientific ignored those promises.

But wait: There’s more. According to the lawsuit, the defendants also violated the Telemarketing Sales Rule through a campaign of robocalls and prerecorded “ringless voicemails.”

You’ll want to read the complaint for a full picture of Redwood Scientific’s alleged business practices, but we’d be remiss in not mentioning that in addition to peddling products to consumers without proper substantiation, the defendants launched a program called Rengalife to distribute the same stuff via multi-level marketing. The defendants touted impressive earnings and promised that people at certain “levels” would have their income “locked in” at “$144,000 a year” – money-making claims the FTC says are false or unsubstantiated.

At the FTC’s request, a federal court in California entered a temporary restraining order in the case.