“This is a global challenge that requires a global response with many, many elements. And one of those elements is carbon pricing. Carbon pricing is an elegant pathway that produces real results, both in reduced emissions and in increased revenues to be directed at a more environmentally friendly economy,” said Governor Brown during his keynote remarks at the Carbon Pricing Delivering Climate Ambition event. “You have to be warriors and innovators and missionaries to keep at it. Climate change, global warming waits for no one.”

Today’s event brought together senior government officials, business leaders and academics from around the world to discuss the key aspects of carbon pricing, which continues to gain momentum as an important tool for addressing climate change. California’s well-established cap-and-trade program, strengthened andextended to 2030 last year by Governor Brown and linked with Quebec’s program in 2014, sets a declining limit on carbon pollution and creates a market to achieve the state’s bold emission reduction targets in the most cost-effective manner. Governor Brown also blasted the Trump Administration’s proposal to roll back methane regulation at today’s event.

Later in the day, Governor Brown met Minister Xie Zhenhua, who is leading China’s 120-plus person delegation at the Summit – building on significant diplomatic and environmental exchanges between California and China. Governor Brown and Minister Xie discussed China’s progress in meeting its goals under the Paris Agreement and California and China’s efforts to strengthen their climate initiatives through subnational collaboration. Last year, Governor Brown and Minister Xie hosted a dialogue between Californian and Chinese policymakers and business leaders in Beijing during the Governor’s California-China Climate Mission, and met at the U.N. Climate Change Conference in Bonn, Germany, where the Governor served as Special Advisor for States and Regions. 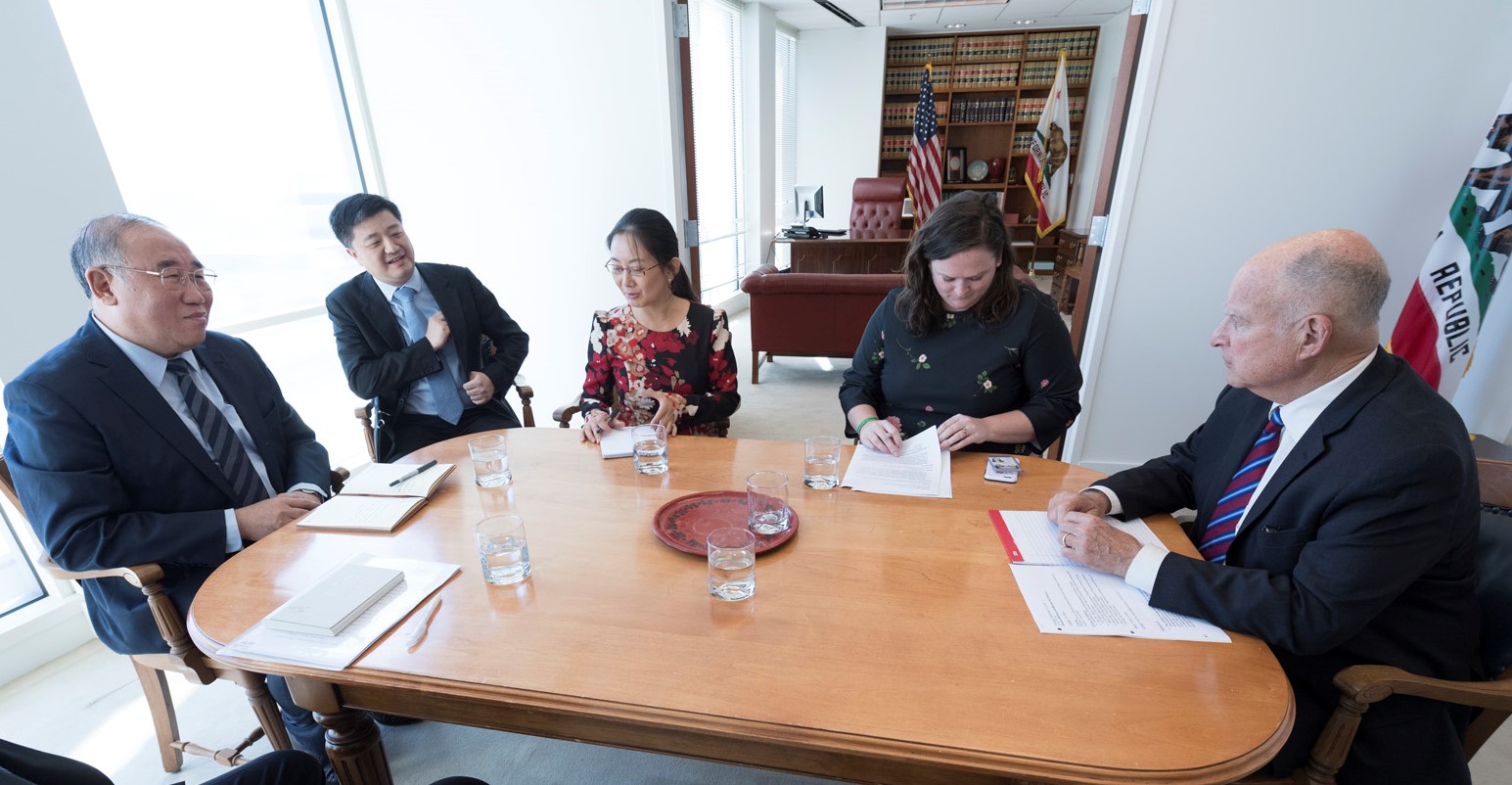 Reaffirming California’s global climate leadership in the lead-up to the Summit, Governor Brown yesterday signed legislation setting a 100 percent clean electricity goal for the state, and issued an executive order establishing a new target to achieve carbon neutrality – both by 2045. Late last week, Governor Brown also signed legislation to block new federal offshore oil drilling along California’s coast and announced the state’s opposition to the federal government’s plan to expand oil drilling on public lands in California. The entirety of the state’s coast has been off-limits to new oil and gas leases for more than 30 years, and the state has not issued a lease for offshore oil or gas production since 1968.

California continues to lead the world in adopting innovative policies to fight climate change. Last week, the Governor issued an executive order to safeguard California’s unique plants, animals and ecosystems that are threatened by climate change and last month, the state released its Fourth Climate Change Assessment, which details new research on the impacts of climate change and provides planning tools to support the state’s response.

Earlier this year Governor Brown issued executive orders to improve the health of the state’s forests and help mitigate the threat and impacts of deadly and destructive wildfires, and get 5 million zero-emission vehicles onto California’s roads by 2030. Under Governor Brown, California has established the most ambitious greenhouse gas emission reduction targets in North America; set the nation’s toughest restrictions on destructive super pollutants; and will reduce fossil fuel consumption up to 50 percent  and double the rate of energy efficiency savings in buildings by 2030. The state has met its 2020 target four years early, reducing emissions 13 percent while growing the economy 26 percent. From 2015 to 2016 alone, emissions reductions were roughly equal to taking 2.4 million cars off the road, saving 1.5 billion gallons of gasoline and diesel fuel.

In addition, Governor Brown has helped establish and expand coalitions of partners across the nation and globe committed to curbing carbon pollution. The Under2 Coalition, which originated from a partnership between California and the German state of Baden-Württemberg, now includes 206 jurisdictions on 6 continents that collectively represent 1.3 billion people and $30 trillion in GDP – equivalent to 17 percent of the global population and 40 percent of the global economy. Members of the coalition make a number of key commitments, including reducing greenhouse gas emissions equivalent to 80 to 95 percent below 1990 levels or to less than 2 annual metric tons per capita by 2050.

Last year, California joined Washington and New York to form the U.S. Climate Alliance, which now includes 17 U.S. states – led by both Democrats and Republicans representing 40 percent of the U.S. population – committed to achieving the goals of the Paris Agreement and meeting or exceeding the targets of the federal Clean Power Plan. Governor Brown also partnered with Michael Bloomberg to launch America’s Pledge on climate change, an initiative to compile and quantify the actions of U.S. states, cities and businesses to drive down their greenhouse gas emissions consistent with the goals of the Paris Agreement.